Norwich — Revolutionary war patriot and Connecticut Governor Samuel Huntington and his wife, Martha, were returned Monday to their burial place with all the honors of a military funeral.

The reinterment followed a month-long, $31,000 restoration of the couple's brick and concrete tomb. Their bones were removed from the crumbling tomb Oct. 20 and stored at Church & Allen Funeral Services, which provided 18th-century style coffins for the reburial.

Martha was interred first Monday. She died and was buried in 1794, two years before her husband.

Members of the First Company, Governor's Foot Guard, carried Samuel Huntington to the tomb. He received a 21-gun salute. Uniformed participants from both the First and Second companies of the Governor's Foot Guard saluted, four color guards participated and spectators removed their hats and placed hands over their hearts in tribute.

Several speakers at the ceremony said their goal is to ensure that Huntington finally gets his place in history.

“Before you leave here today, you'll be convinced, as I am, that Samuel Huntington was the first president of the United States under the Articles of Confederation,” said William B. Stanley, president of the Norwich Historical Society, which led the effort to restore the burial place.

Huntington was born in neighboring Scotland but launched his successful law career in Norwich. He became a politician, a judge and member of Continental Congress. He signed the Declaration of Independence and presided over the Congress during the Revolution. He was president when the Articles of Confederation were ratified and the states called themselves “the United States in Congress Assembled.” 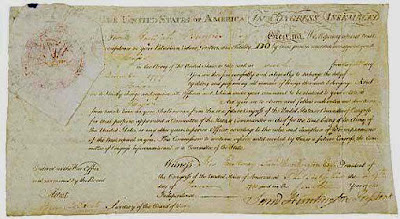 Huntington was later governor of Connecticut during ratification of the U.S. Constitution.

Historian Stanley Klos of Pennsylvania, a champion of Huntington's status as first president, spoke passionately about his efforts to gain Huntington recognition. Klos said he was deeply honored to participate, but was also glad to pass the torch of recognizing Huntington's accomplishments to Norwich leaders and residents, and especially to today's Congress.

“Why is plain old Stan Klos standing here eulogizing him?” Klos asked, “and not some other president, maybe a former president, or even President Bush?”

Klos drew laughs and applause when he launched a tirade against misconceptions of American history. He cited two main reasons for Huntington's anonymity in American history — the aura of George Washington as the nation's father, and the failure of the Articles of Confederation, which were later replaced by the Constitution.

“We don't want to be associated with losers,” Klos said. “We're Americans.”

Glancing behind him to U.S. Rep. Rob Simmons, R-2nd District, Klos said Huntington and the other nine presidents who served under the Articles of Confederation should be included in the annual wreath-laying ceremonies at the tombs of former presidents on their birthdays. Huntington was born on July 3, 1731.

Simmons said he already had spoken to U.S. Sen. Christopher Dodd, D-Conn., and the two will meet soon to try to rectify the oversight.


Dodd, who grew up in Norwich, was scheduled to attend Monday's event, but had to stay in Washington for the debate on the controversial Medicare prescription drug bill.

Dodd's wife, Jackie Dodd, read a letter from the senator. However, she said she came to give some attention to Martha Huntington. “It reminds me that not many people know much about Martha,” she said. “I'm sure she stepped in for him on occasion.”