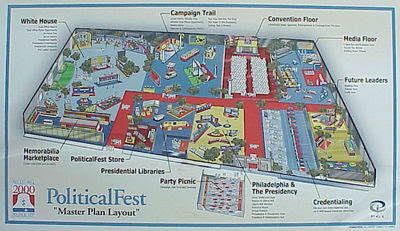 "World's Fair of Politics"
A Success in Philadelphia


While the Republican National Convention itself was open only to delegates, invited guests and members of the press, PoliticalFest, billed as "a one-of-a-kind 250,000 square foot world's fair of politics" was open to the public. 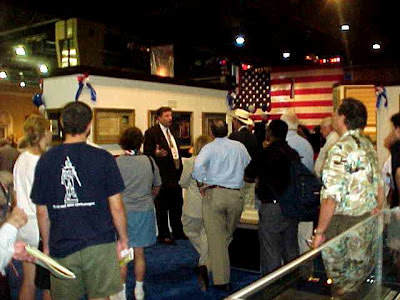 PoliticalFest was held from Wednesday, July 26 through Thursday, August 3 at the Pennsylvania Convention Center at 12th and Arch Streets in Philadelphia. The Political celebration was true to its billing "using interactive-devices, multi-media and video, rare historical objects and museum quality archives, PoliticalFest will transport visitors from the campaign trail, to the Oval Office, to the 2000 Republican Convention Floor, to past presidencies."


Included in PoliticalFest were the areas entitled "Philadelphia and the Presidency"  which included "Liberty Bells, an American Celebration" in which recreations of the Liberty Bell from 55 States and Territories will be featured. This exhibit  also include historical items which shaped the country from area museums and historical buildings.

Of Special note, The "Rebels With A Vision - Historical Documents of Freedom" exhibit area included rare historical letters, documents and manuscripts featuring the Wet Ink Transfer of The Declaration of Independence, the First public Printing of the US Constitution and George Washington's first State of the Union Address.  These 76 documents and the acts of King George III, George Washington, Thomas Jefferson, Benjamin Franklin, James & Dolley Madison and many others others were brought to life by the personal tours of their capable host Stanley Klos. 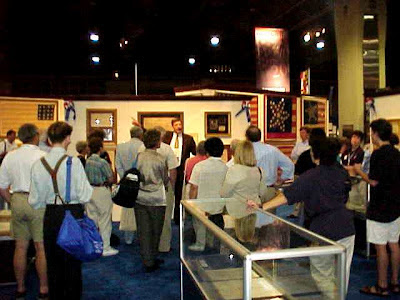 "The White House" exhibit area included a life-size replica of the Oval Office, as well as displays of White House china, gardens and gowns of the First Ladies.

Also included at PoliticalFest was a CyberCafe where you can log onto political internet sites, a Memorabilia Marketplace where you can shop at booth of over 100 vendors.


PoliticalFest was one of the most memorable events occurring in Philadelphia in 2000.