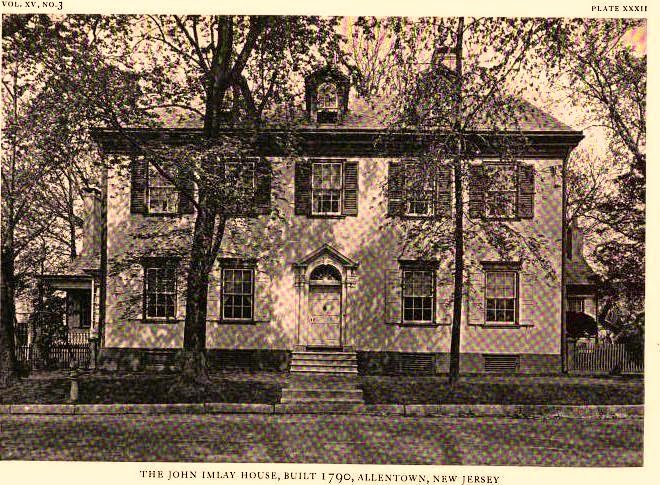 THE RARE QUALITY of the Imlay House, and particularly the extraordinary interest of its interior, deserve to make it widely known. Among the many Early American houses remaining in New Jersey, this house has scarcely a rival and it would take high rank among old houses outside the state. 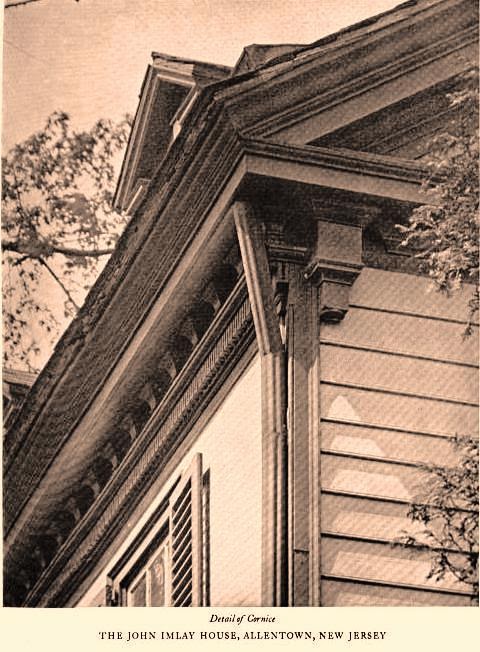 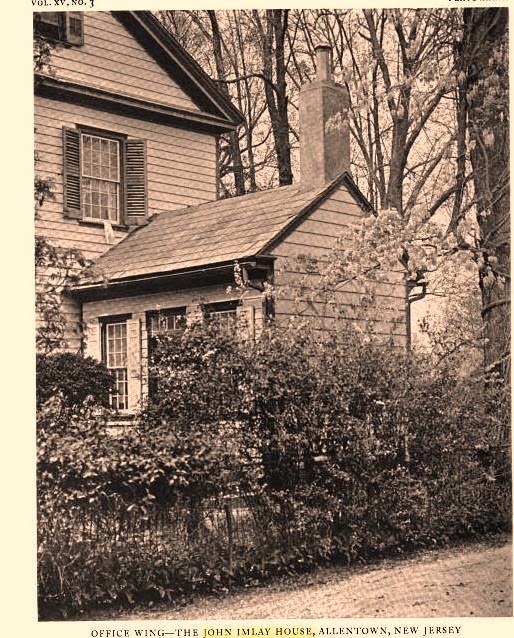 Connoisseurs of Early Americana know of the Imlay House as the source of the wall-paper now in one of the rooms of the American Wing of the Metropolitan Museum of Art, New York. Architects who are familiar with our native tradition doubtless have noted the brief mention of the Imlay House made in the excellent book, "Colonial Architecture for those about to Build," by Wise and Beidleman. But such mention is entirely too scant; only those few who have actually seen the house itself have any idea of its distinction. 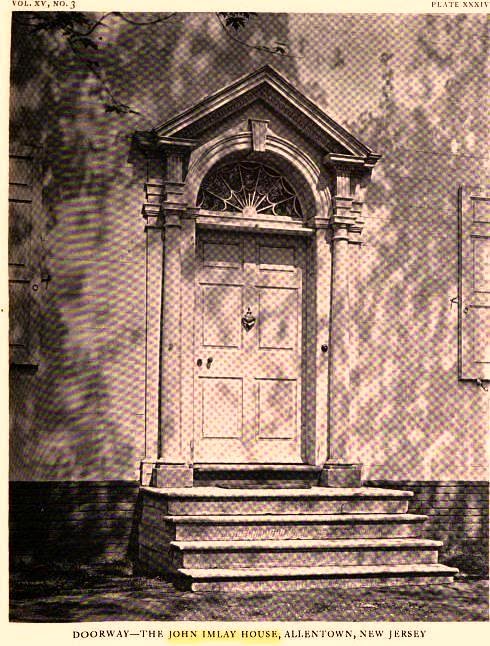 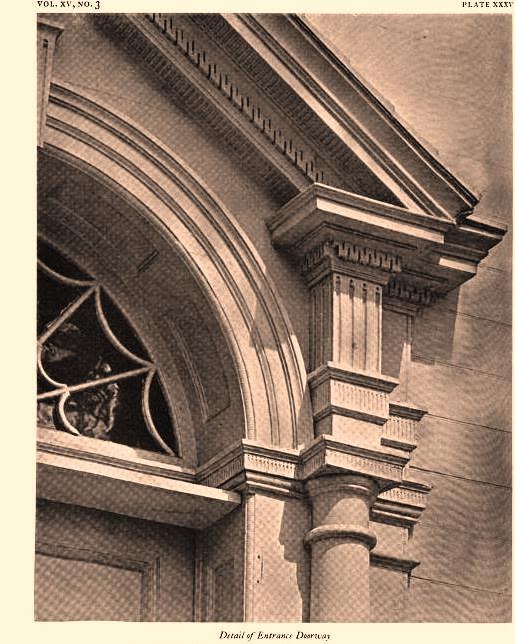 Nor is there much knowledge available concerning the Imlay family. John Imlay (b. 1754-d. 1813), who built the house, was a shipping merchant engaged in the West Indies trade, with offices in Philadelphia, but who retired to the placid countryside of New Jersey for his permanent home.The writer has a slight knowledge of the Imlays, since his grandmother was an Imlay, whose father, Robert Imlay, was likewise a prosperous Philadelphia merchant, closely related to the Imlays of Allentown. Another Imlay was Gilbert, captain in the Continental Army, who, after the Revolution, went to Paris and there entered into a love affair with Mary Wollstonecraft, the English writer and pioneer feminist, whose daughter married the poet Shelley.

The date of construction of the house must fall close after 1790, because the bill of sale for the wall-paper now at the Metropolitan Museum, bears the date of April 18th, 1794. The paper was sold by William Poynsett of Philadelphia, a well known maker and importer of wall-papers. It is an imported French Louis XVI, hand blocked, classic design, in a pattern of light grey garlands and small medallions displayed against a reddish-brown background, delicate in scale. 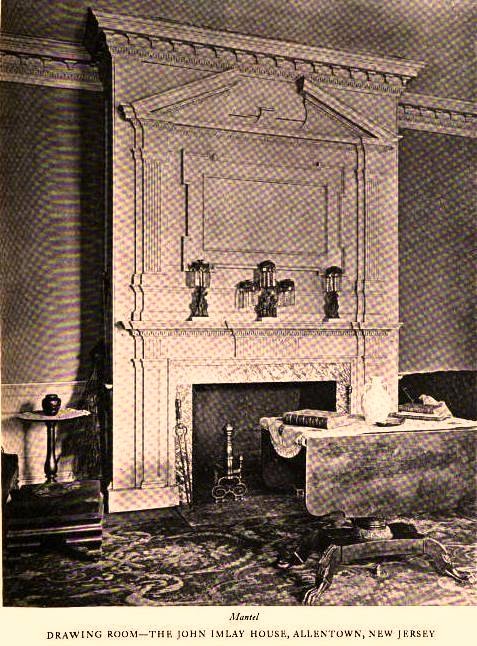 In those days of the first decade of the Republic, Allentown consisted of about three substantial houses built in a group close to the elm-lined road, and in addition a gristmill that was situated about two hundredyards away. Allentown lies ten miles east of Trenton and about forty miles northeast of Philadelphia. The Trenton district was important at that time and Jerome Bonaparte made his first residence in America at Bordentown, six miles away from Allentown. Today, Allentown has changed but little from the idyllic days following the Revolution. It has grown to about a score of houses and the old gristmill still runs! Requiescat!

The Imlay House is placed lengthwise of the road and is brought so close to the street line that the lowest of the four marble entrance steps encroaches on the sidewalk. The two short, balanced wings are set back, permitting a small lawn closed off from the street by a picket fence. The corners of the house are placed to the four cardinal points of the compass. The plan of the main house is the familiar one of an entrance opening from the street intoa central stairhall runningentirely through the house, with four main rooms, two on each side. These main rooms, about twenty feet square, are formed by a transverse wall and the two big chimneys are placed back to back, to serve the front and rear rooms. 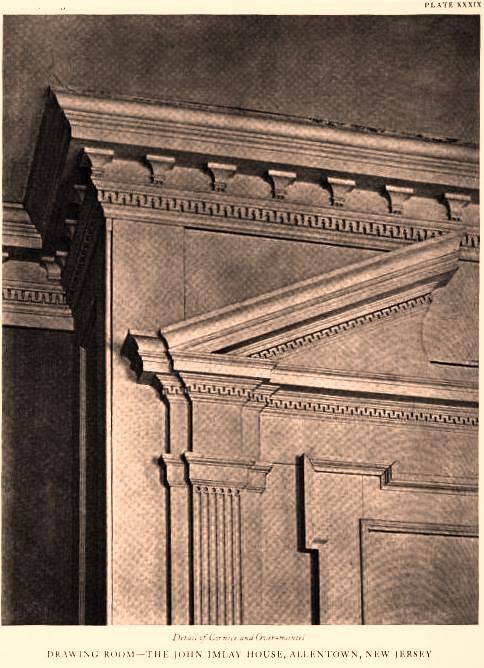 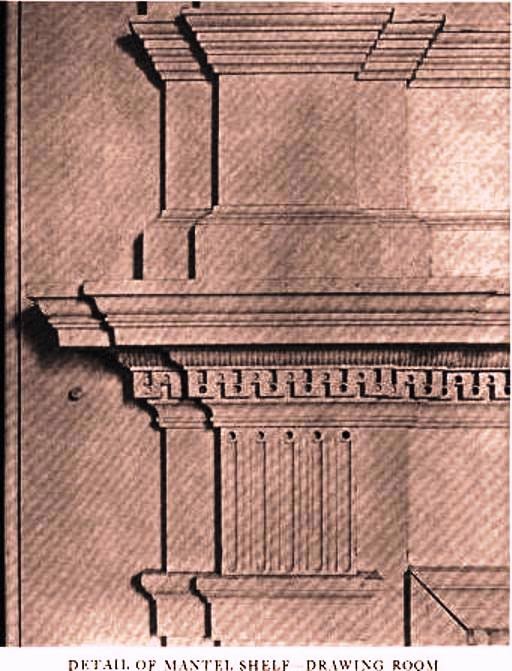 One of the wings is the kitchen and the other was John Imlay's office. Each has a chimney in the gable end. The house is abundantly supplied with open fireplaces, there being eleven all told, each one furnished with a mantel, and each mantel different in design from the others. The more important rooms are variously decorated with low wainscot, fine door and window trim and ornamental cornice at the ceiling.

The house is solidly constructed, having stone foundations that are carried nearly up to grade, topped with several courses of brick, forming a low base which is finished with a moulded brick watertable. The interior division walls of the cellar are of brick. 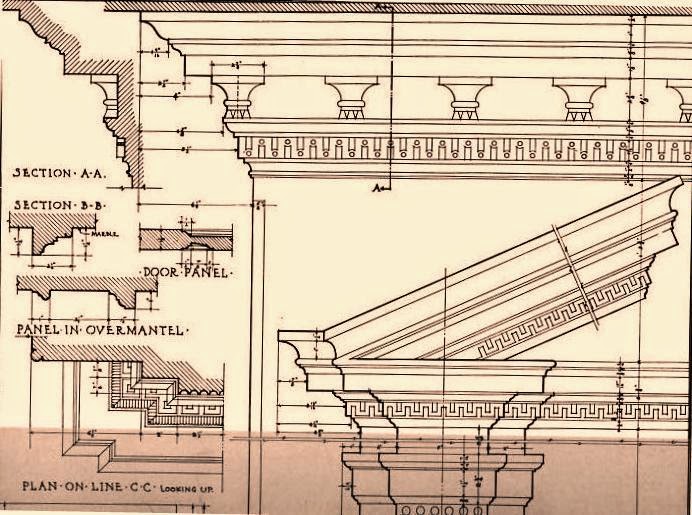 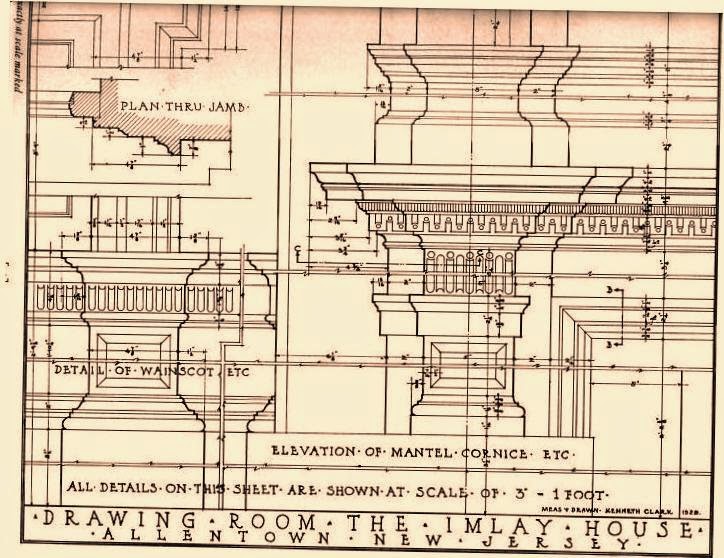 The main house and the wings are roofed with ridges running the long way of the house. The main roof is pierced with three small gabled dormers, placed close to the eaves and designed with arched windows and small pilasters. Except for a small porch which has been added to the kitchen wing, the house remains today practially unchanged.

Such are the main characteristics. It is when one examines the carefully wrought, classic detail that one sees what a masterpiece it is, this serene old home of the Early Republic. Conventional as the exterior is, one could never tire of its simple, frank proportions. It is trite to say that every line, detail and moulding is right and could not be changed without damage to the effect, but it is true in this case. The broad low proportions, the perfect scale of the two rows of windows, the delicately detailed cornice and above all the beautiful doorway, with its jewel-like sparkle of decoration—these can hardly be over praised. 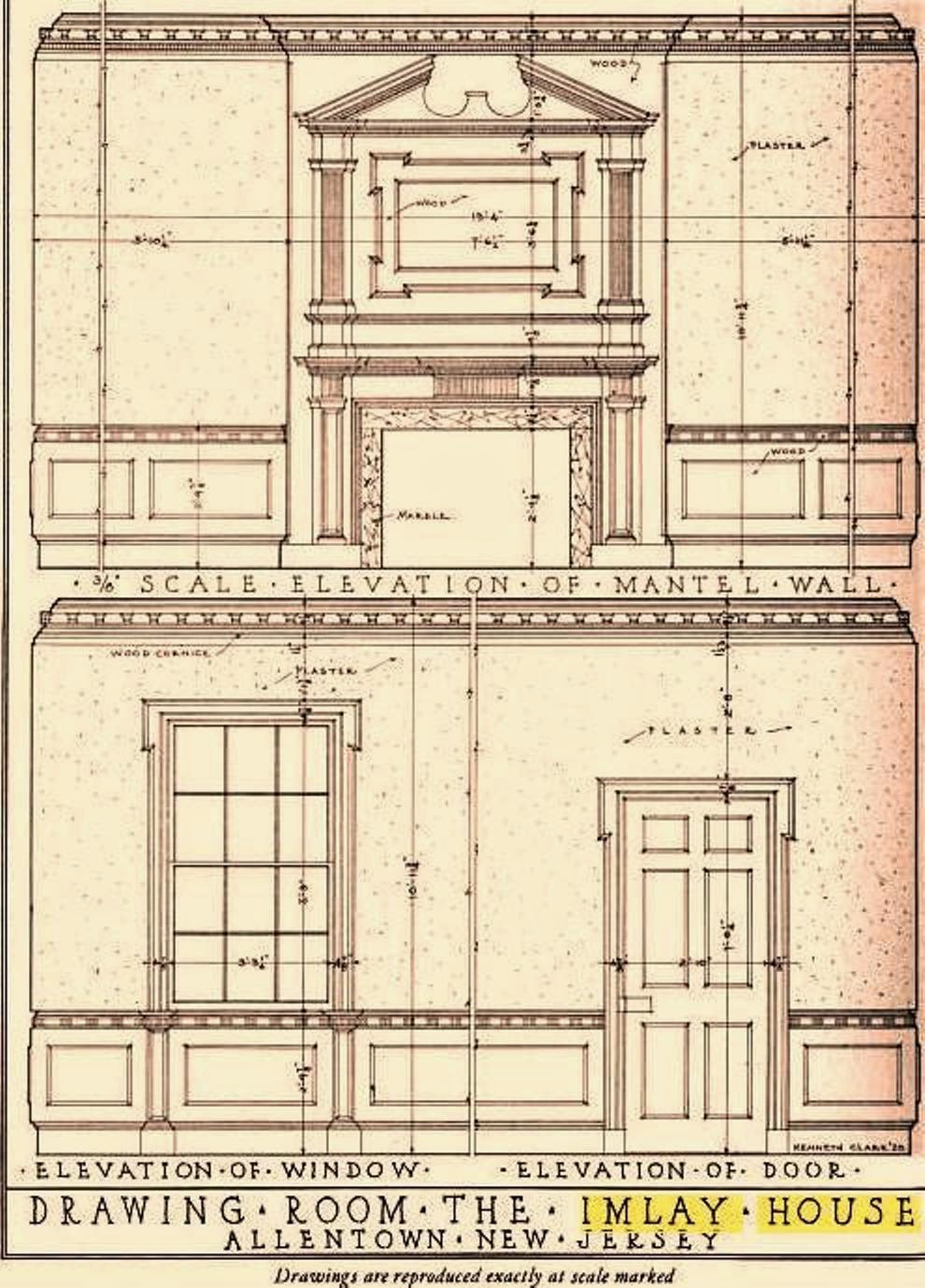 The architectural elements of the Imlay house, are fairly typical of the period and of the region northeast of Philadelphia. Every bit of detail, down to the tiniest curve and moulding has been studied almost to the ultimate possibility of craftsmanship. As a result of this exceptional design and workmanship, the Imlay House is like one of those finest masterpieces of EarlyAmerican furniture—say one of Duncan Phyffe— which has a final touchof grace,of perfection beyond other similarpieces. 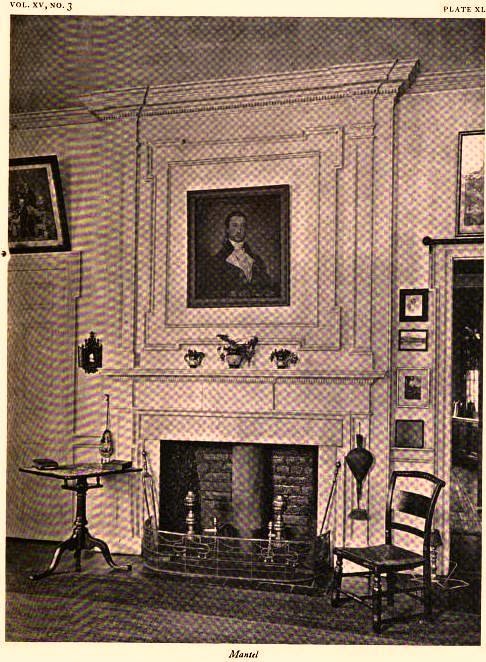 The shutters are thicker and have more character in the panel mouldings than is usually the case. On the main doorway, the delicate play of light and shade on its projecting forms reveal much subtlety that is not at first apparent. Note in the illustration the tiny drill-holes accenting the vertical channelings and the under sides and front of the dental course under the raking cornice, also the wood pattern of the fanlight with the three little "drumsticks" in the centre, and the moulded edge of the door jamb, which is stopped by a tiny block just below the impost of the arch.

The main cornice shows the same imagination and the same infinite care. The edges of the clapboards and of the gable are beaded, in order to soften the lines; the vertical corner-board is panelled and is more strongly modelled than usual; and the graceful brackets under the overhanging cornice have an unusual detail, particularly at the corner. The details of the dormers are slightly more accented, in order, no doubt, not to lose their character when seen from the street. Another variation is seen in the change in size of the window panes on the ends of the main portion of the house and in the wings. On the front, it will be noticed that the siding is matched in order to present a more finished surface close to the street. This siding has-a bead and is about 5fi" wide. The end clapboards are laid about 8" to the weather.

But, as I have intimated, remarkable as the exterior of the Imlay House is, even more interesting is its interior.

The interiors have all the sophistication and fine finish of the best early Republican houses of the mansion type, as found in the north. They have not the low-ceilinged, homely air of the farmhouse type on the one hand,

nor have they the Georgian massiveness of the great Southern plantation homes. They seem to stand mid way between these extremes. Indeed, John Imlay's house bears much resemblance to the homes of his contemporary merchant ship masters of Salem and Newburyport and, in detail, one senses the same classic hand in the work of the craftsmen or architects who built this house —probably men from Philadelphia—as one feels in the Salem interiors of Samuel Maclntyre. 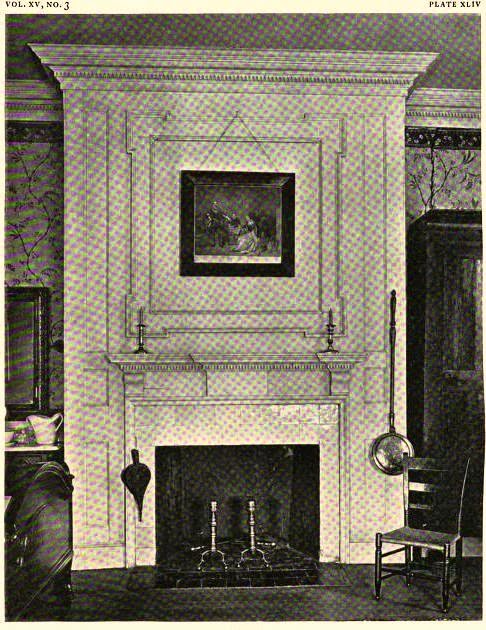 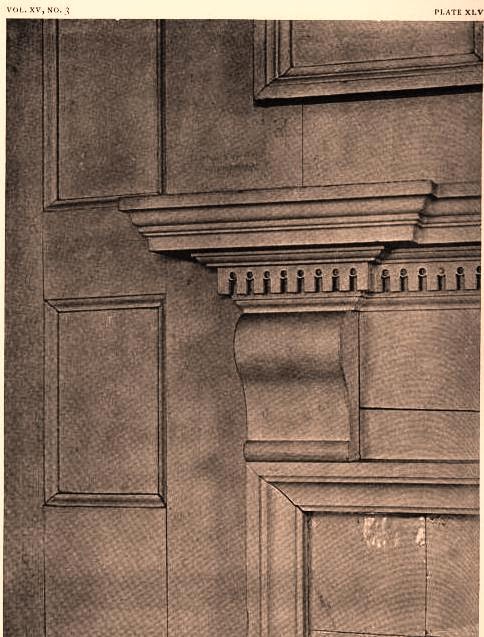 In all, the house contains fifteen rooms, of which the most important naturally are those on the ground floor of the main portion of the house. It is a curious fact that the interior cornices have almost the same design as the cornice of the exterior, although their scale, of course, is smaller. Points of interest are the original tile fireplace facings in the two main front rooms and the hardware, of which the locks are generally the box-lock type, of wrought iron with brass handles.

The detail of the main stair hall has a touch of farm house architecture, though it is quite perfect in the design of rail, balusters and stairs. An unusual form is the graceful scroll-saw ornament under each riser. 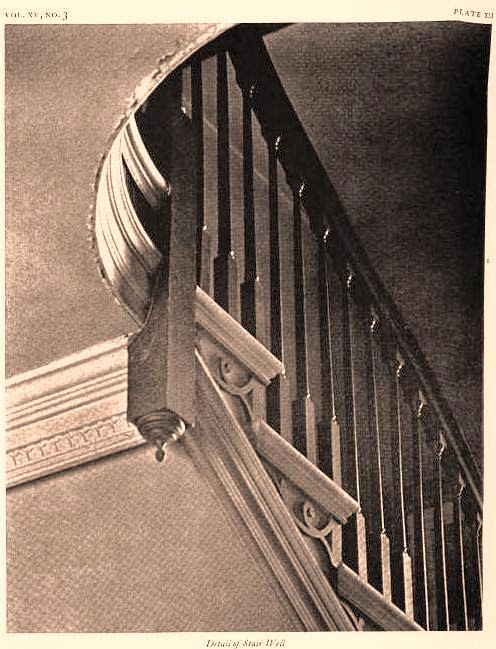 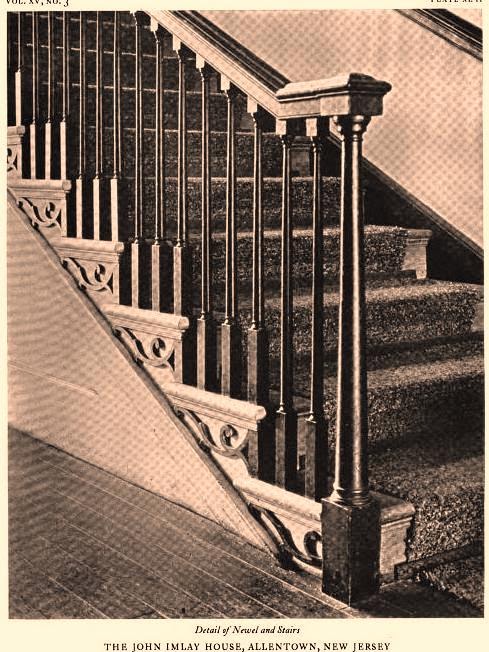 One could hardly imagine a finer interpretation of the style than is seen in the decoration of the drawing room. This work is indeed comparable to Maclntyre's, and it was here that just a little more effort was spent, if possible, than in the others. Its rare beauty is attained by scholarly design, by the rich details and by the same painstaking workmanship that is noted throughout. This is apparent in the illustration of the detail of the upper part of the over-mantel, showing the room cornice. The parlor is less sophisticated, particularly with regard to the cornice, than the drawing room, but it is no less perfect and has a charm of its own. John Imlay's portrait hangs over the mantel. 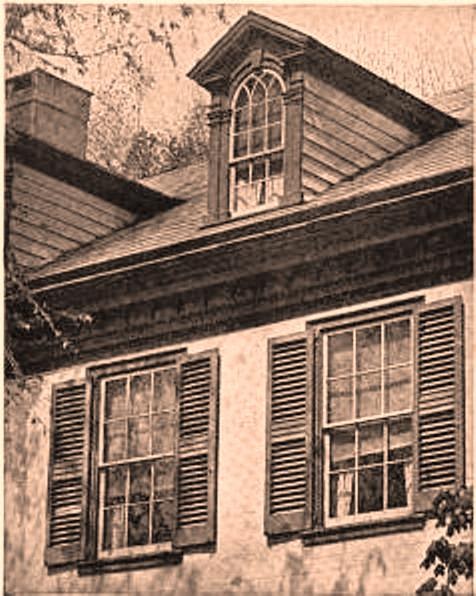 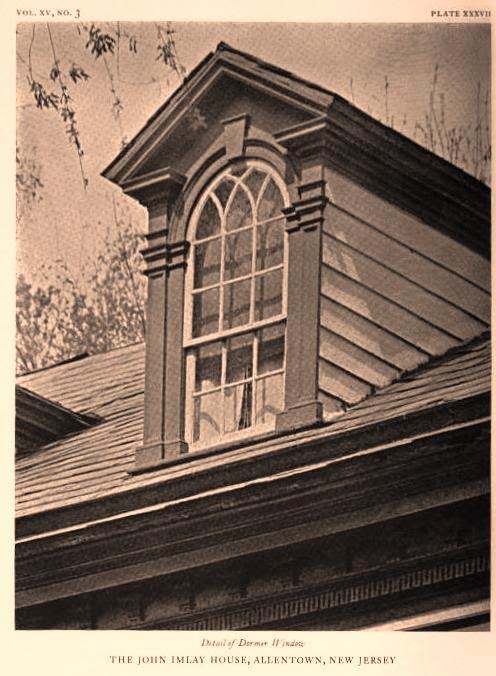 Upstairs, one finds a different treatment in the guest room of the second story front. The cornice is heavier and the detail has more relief. The mantel is almost square in shape to fit the smaller fireplace of a bedroom and it does not extend across the full width of the chimney-breast, but leaves a space for a row of long panels on each side. The original wallpaper is still on the walls. It is of a freer design than the one in the Metropolitan Museum, but equally delicate and finished with dark border at the top under the wood cornice. 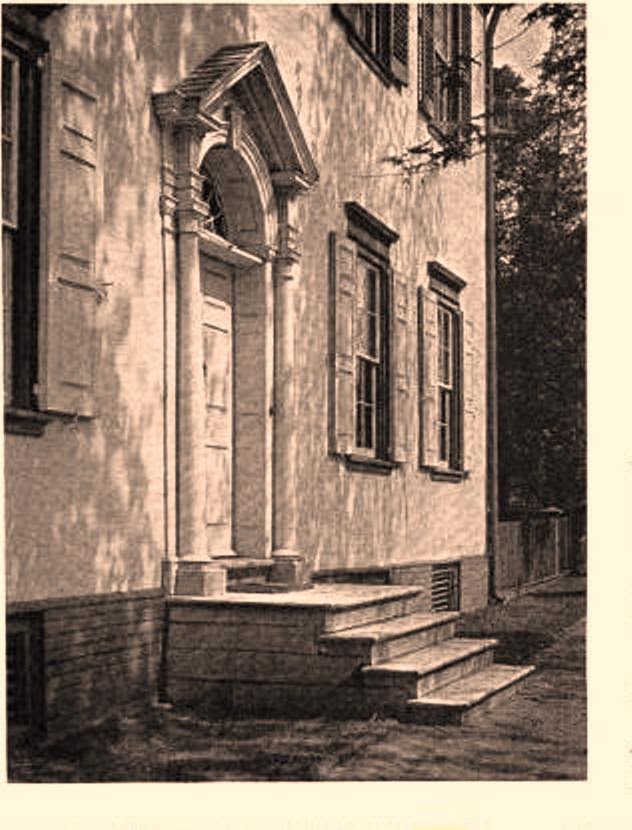 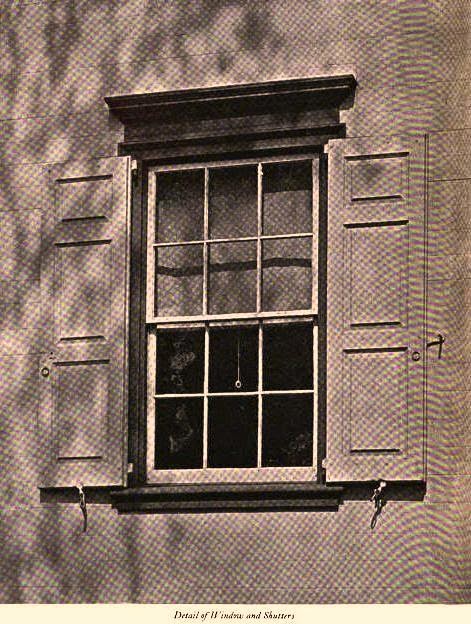 There is an endless fascination about an old home like this. Its quiet beauty is typical of the Early Republican days of serenity and good living. Our age is different but perhaps this very fact makes us appreciate all the more a fine example of the admirable architecture of earlier times, such as the Imlay House.